Who is really under siege? 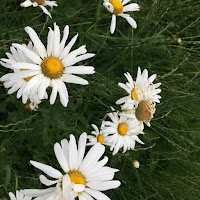 Note:  I wrote the following post in response to the article Bayside at Rock Bottom:  Portland Neighborhood is Under Siege. Reading this article raised many emotions for me, but the predominant ones were anger and frustration.  Our country has a habit of pushing those we consider undesirable (the poor, the addicted, the mentally ill, the homeless, people of color, immigrants...it's a long list) into neighborhoods where we don't have to witness their existence.  They are often also the first impacted by funding cuts to things like food assistance, recovery programs, and services for the  mentally ill while we stand by and say nothing.  We ignore them, because "it's not my neighborhood thus not my problem" until the problem becomes so big we can't ignore it anymore.

I agree that there is a problem in Bayside.  I agree that many of us don't feel safe walking through certain parts of the neighborhood, but there is a reason it has come to the state that it currently is.  I also believe that the only reason it is getting attention now is due to the newly increased value of Portland peninsula real estate.

There is a reason that it has become this bad and that reason has its home in each of our laps  Because this isn't just a Portland problem, it isn't even just a Maine problem, it is a cultural problem and until that culture changes - until each and every one of us steps up in some way - it isn't going away.

Drug use is nothing new.  Poverty is nothing new.  Homelessness is nothing new.  These things have existed in Portland and across the State of Maine for decades.  There are scores of people, many volunteers, who have worked to feed, clothe, and house those who fall on hard times and try to find treatment for those who need it. They have contributed their time and their money to try to solve what can at times seem an insurmountable problem.  And they have been asking for help for nearly as long.  Yet what is it that brings the crisis of drug abuse, poverty, and homelessness to the front page of our paper?

Is it concern for those who are addicted?
Is it worry for how those in poverty will feed themselves?
Is it compassion for those who have no place to sleep at night?

No, it is that that people have begun to move into the neighborhood where it exists.  Portland’s recent boom has made every inch of real estate on the peninsula a development opportunity.  But it is a development opportunity that won’t succeed if those who live there are forced to confront the result of what NIMBYism and turning a blind eye to the suffering of our fellow human beings has wrought in our city.

It was fine to put all the shelters in one neighborhood when that neighborhood was already considered undesirable.  Oh, we need to build a second shelter?  Let’s put it in the same neighborhood.   It’s already full of poor people, immigrants and other undesirables, at least with a shelter they will be inside, and we won’t have to see them.

Oh, but it’s not our fault that there are so many right?  I mean, people hear that Portland has services and so they come here.  There are stories that other towns put people on buses and send them to Portland, because they can’t help them in their towns.  And why is that exactly?  Why are there no services in these other towns?

You want to build a drug treatment half way house in New Gloucester?  You want to put that in MY town?  No.  No way.  Not here.  Not in my backyard.  Not in my neighborhood.  It’s not my problem so why should I have to deal with it?  I mean it’s not that we don’t want to help people…we just don’t want to have to do it here.  There must be some place else you can build this treatment center, this food pantry, this low-income housing, this shelter…anywhere but here.

It’s not my problem.  I don’t have a responsibility to fix it.  I’m not the one who made them poor, or hungry, or addicted.  Can’t we just move them to another neighborhood?

It’s always someone else’s problem until I want to live in a trendy little city by the sea and I move into a neighborhood that, until now, no one wanted, and everyone pretty much ignored because “It’s wasn’t their problem.”

There is a theme here and the theme is us.  Each one of us is a part of this problem.  Until we recognize the systemic classism that has led us to segregate those who live in poverty into one part of any city and in turn make that neighborhood the dumping ground for all the social problems we don’t want to confront.  Until we recognize that we regularly turn a blind eye to the suffering of our fellow human beings.   Until it becomes culturally shameful to have any person not housed, fed, and cared for, the problem will not go away.

Email ThisBlogThis!Share to TwitterShare to FacebookShare to Pinterest
Labels: sustainability