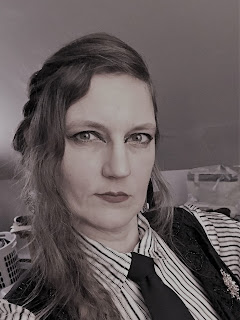 I have often struggled with being female. It isn't that I necessarily wanted to be something else,  though that might be simply because at the time I didn't think being anything else was an option. Growing up I was always fascinated by stories of women who dressed as men to hide, learn, fight in wars, to learn to fly, to be free. I also thought at times of becoming a nun - unsexing myself to serve some higher power (I was a bit of a mystic too).  And I have always been a bit disappointed that because of my sex I would never grow a beard. I guess if I'd had a choice in the matter I'd have been an ambiguous other - not boy or girl.

I remember the arrival of my period as being a momentous non-event.  I was very educated on what it was all about and mostly knew what to expect.  Part of me was excited; it did feel like a right of passage of some kind even if I didn't quite understand why.  And the following summer at Rites of Spring I was excited to take my turn in the moon hut that the women's circle built.  I was intrigued by my menstrual blood and my spiritual tradition considered it something sacred.  I dutifully tracked my cycle by the moon and felt a bit special that it too followed a 28 day cycle.


It was the arrival of my breasts that disturbed me.  Every thing else was internal...breasts were something visible, seen.  With the arrival of my breasts my body seemed to no longer be mine.  It was now open to rude comments, uncomfortable stares, and unasked for groping.  A few years later I discovered sex, and that I mostly liked it.  From them on I felt stuck in a physical contradiction of pleasure and loathing; fear and desire.  I was torn between hiding my body and showing it off.  One day it was heavy, bulky sweaters, the next a tight fitting leopard dress.  Both served to help me hide myself (a whole other blog post there...).

As a younger women I looked forward to aging, to menopause, and the safety of non-operational ovaries and no longer having the hassle of monthly periods.  Yet, when the first signs showed up a year or so ago I found myself fearful of becoming invisible in other ways.

So I am still full of contradictions.  I fear the invisibility of aging but I welcome the feeling of once again owning my body.

Contemplating my Lady Parts
Today I am thinking of my uterus.
I am pondering my ovaries, my hips, my breasts.
And how many days did I detest them?
I did not ask for these things - this female body.
When my breasts appeared, it seemed my power was stolen away.
I was no longer seen.
When my uterus came awake
My safety vanished.
17 in the back of a van (please, no, please, no)
On guard for a lifetime.
21 a period missed (oh shit, not now, not with him)
27 again, this time for real.
I stared into the faces of goddesses and asked,
“Why? Is there some magic I am missing here?”
But most days I was indifferent to them.
I managed them with bras,
tampons,
pads,
pills,
condoms,
exams,
an IUD.
39 there was the scare - the day the test came back ambiguous.
Every six months...did I pass this time?
Two years before a yes.
Deep breaths.
A period skipped at 45
Fear…and curiosity
These things I loathed.
Why do I now fear losing them?
I imagine them shrinking, shriveling, becoming
wrinkled sweet little prunes.
Sweet prunes.
Sweet little prunes.
My little prunes.
Today I ponder my uterus, my breasts, my hips, my ovaries
And I am counting down until the day
When my body once again becomes
only mine.
Posted by Joie at 9:12 AM