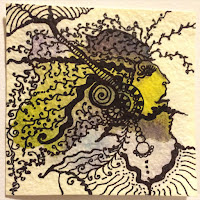 This was written this morning in response to the numerous Facebook posts from people disappointed with the election results who declared they'd never vote or participate in the process again.  Most of the posts that I saw were from people who are a part of the dominant culture of our country - white, middle class, heterosexual, etc.  Seeing people who live within the safety of their particular privilege express how they were giving up showed me how much work we have left to do, and how many people don't recognize just how difficult change actually is.

I am not giving up.

I believe that real, systemic change is possible, but I know it is not instant. It starts and ends at the community level.  It starts and ends with me. It never happens from the top down.
Working for deep change means letting go of what is comfortable. Because change, real change is not an easy walk to polls to cast a vote, going home to give yourself a pat on the back for showing up, and then throwing your hands in the air and saying, "Why bother? I'm just staying home." When it doesn't go your way.
It means acknowledging the sexism, racism, homophobia, classism, ageism, and transphobia that we carry in ourselves while bringing it out into the light for others.
It means showing up for the homeless, the poor, the oppressed, the people not allowed a voice, or who have been lead to believe they don't deserve one.
It means if you have the financial means to make better choices that support others and our planet, that you do so even if it's inconvenient.
It means that you keep speaking truth to power even when the power is something that has given you an advantage you never had to work for.
It means giving up hiding away because that's the easy thing and you are frustrated.
It means that you hold yourself and others in your life accountable.
It means reaching out, connecting, building, creating community, and working to see the common humanity in every person you meet.
It isn't one vote, or one rally, or one protest. Real change means challenging everything about the way things have been every single day of your life.
Real change is frightening, even for those who want it, because it often feels easier to stick with what you know, even when what you know isn't working.
You don't get to say you want change and then sit down when things get uncomfortable or difficult. That is the time you need to lean in, face the shadow, and keep doing the work.
It's the only way things get done. It's the only way they ever have.
Posted by Joie at 5:19 AM