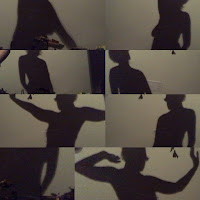 This week during one of my personal movement sessions I moved with the focus of what saying yes to something felt like in my body.   I quickly realized that there are two very distinct types of yes in my life...

The yes that isn't makes my shoulders tense, my chest drop, and gives me the sense of being under a great weight.  I know that this is the yes that I often give because I feel like it is something I should be doing, or that I might disappoint someone.  There is almost always some kind of anticipated outside judgement involved.  It is the yes that leads me to feeling overwhelmed and doubt filled.  It also more often than not leads to a period of procrastination in starting whatever project I agreed to.

The other yes, the one that is more in alignment with my vision and purpose, instead brings a soft opening.  I feel like I want to lift my heart to the sky.  There is a sense of being about to take flight. My body feels lighter.  It comes with a deeper knowing of rightness.  Later, when I sit to do the tasks associated with these projects, even the mundane, non-fun, boring tasks that accompany nearly any great endeavor, there is still a sense that I am serving something deep within myself.

That doesn't mean that there isn't any doubt or fear that accompanies this sort of yes.  In fact there is often a hesitation, a questioning, but these fears and hesitations sit in the same place as the yes does; they are its shadow.  They live in the bits hidden behind old traumas, tucked away out of a need to keep these precious parts of myself safe.  These are the fears I need to allow myself to breathe into, and heal.

My body is often far more wise than my brain.  Learning (or rather re-learning) to listen to its voice is ongoing.