I have started to gather together the stories that have come to me in dreams.  They are scattered across blogs, Facebook posts, and drafts never shared.  This dream came to me a few years ago and it has stuck with me. You can find the recording of the dream on my SoundCloud page. 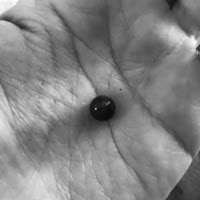 It is a small, nondescript house, with an a plain shed standing beside it. Inside the shed the walls are lined with shelves that are filled with large storage bins.  There is a long workbench on one wall and only one door.  There are no windows.

Each morning a woman goes to the shed and unlocks the doors. It is always early, the grass will be wet with dew or crisp with frost, and the morning shadows long and low.  She steps inside and waits.  Soon she hears the crunch of gravel beneath the tires of a delivery truck.  She hears the driver open his door and step out onto the driveway.   She listens for the sound of the delivery van door sliding open and the driver’s footsteps as he approaches.   She sees him silhouetted against the morning light as he steps into the doorway.  They exchange pleasantries.  She signs for the delivery and he hands her one plain white number 10 envelope.

She pauses in front of the workbench waiting until he is gone before opening the envelope.  As soon as she does music begins to sound. One song at a time she hears the last time a piece of music has been played, or sung.  Sometimes it is entire orchestras playing complex symphonies but more often than not it is a single human voice humming absentmindedly.  She often wonders if the owners of the humming voices ever realize that they were sharing this song for the very last time.

As each note sounds out into the air it solidifies into a tiny colored bead and falls into her open palm; a forever frozen musical vibration.  One by one she places each note into a tiny padded box, like those that expensive jewelry comes in.  Each box uniformly gray, and once closed, utterly unremarkable.  She packs them by the hundreds into the large plastic bins.  Note after note, song after song.

At the end of the day, when the last song has sounded, she writes the date on the outside of the envelope and files it away in a cabinet full of thousands of other envelopes.   She turns off the single light in the shed, padlocks the door and go back into the house to make dinner.

She doesn’t know what becomes of the notes after she packs them away.   She knows she is not the only person doing this.  There are many around the world doing this work day after day.  She knows that the shed is not large enough to possibly hold all of the forgotten songs she has stashed away over the years.  There is some mysterious process that she has never witnessed in which the songs are carried away to their final destination. She imagines that somewhere there exists an immense warehouse with sky high shelves full of stacked bins, filled with an infinite number of little gray boxes, each holding a tiny gleaming and silent note.