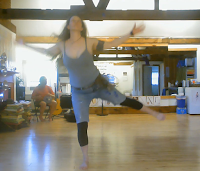 The following was surprisingly difficult for me to write about.  I still struggle with letting go of the belief that the face I present to the world has to be a perfect one, and that I must appear strong, solid, together, etc., even when I'm not feeling that way.  But I am working very hard on being honest about where I am and what I am feeling...so here goes.

I love performing.  Whether I'm dancing, sharing a spoken word piece, or playing music, I love the shared experience of live performance. I love the collaborative process of creating a new work. I love that no two performances are the same.  I love how it pushes me outside my comfort zone.  I love the unpredictability of improv.  I love the high after a show that goes well.  Performance has been my boost, my balm, my escape when life proves to be more difficult than I can manage.

Like many performers, I am nearly always anxious and nervous before a show.  I've been known to joke that I spend the last ten minutes before going on stage convincing my body and brain that, despite what I'm feeling, I am not actually about to be eaten by bears.  I also grapple with issues around feeling good enough, and yes, I struggle with comparing myself to other performers, but there has always been a joy I feel on the stage that is stronger than those thoughts.  Generally, once my foot hits the stage, my anxiety has fallen away and I'm all in.

But lately something has changed.


Over the past year, when I take the stage my general pre-show anxiety has gone away but instead of being replaced by the usually focused joy of performing, I'm filled with nearly paralyzing panic.

(That was really hard to write - truly, I sat here, fingers hovering over my keyboard for a good couple of minutes asking...do I want to admit this publicly???)

It first happened at a show last spring.  It was one of my troupe's shows.  I was doing a performance I'd done at least a dozen times.  I was feeling anxious, but passed it off as pre-show jitters which I assumed would fade as usual once the performance began.  But the moment I stepped out before the audience my heart started to race, my knees were shaking, and my hands began to sweat.  I felt nauseous.

I heard the music playing behind me but it suddenly seemed to make no sense.  Despite the fact that just a few minutes before I'd been playing percussion with the same band that was now playing music for me, I could not find my space in the rhythm.  It sounded like a scattering of nonsensical noise.  Most of my performances are improvisational but I generally go it with some sort of plan.  This night my mind was an utter blank.  I froze.

I did move eventually, but I don't recall what I did.  I just remember the feeling of wanting it all to be over.  I wanted the music to stop. I wanted to leave the stage and never come back to it again.  When I saw a video of the performance my movements seemed awkward and stiff, my face without expression.

When I had some time to think about it I was still dismissive.  I thought maybe I'd not prepared enough.  Maybe I'd not taken enough time before the show to center myself.  I had a long list of reasons why it happened.  And I convinced myself it was a one time event.

Except it wasn't.  And it got worse.

I practiced more.  Prepared more.  Moved more.  I tried choreographing performances more thinking that having something memorized might help ease the anxiety.  I tried muttering mantras under my breath, deep breathing, keeping myself occupied right up until just before I went on stage.  None of it helped. Each performance brought more anxiety, more fear, and another round of panic.

I started to get anxiety about my anxiety.  The days leading up to a show were torturous because I knew what would happen as soon as I got on stage.  I avoided even talking about the shows to people because it brought up too much fear.   I didn't tell my troupe-mates about it because I'm the troupe director, and I didn't want to appear to be anything other than totally together.  Other than a brief mention at a practice earlier this week, I've still not been very open about it.

I tried to find a reason...

And a host of others...none of which fit.

I'd like to say that I'm going to finish up this post with some story of how I found a cure  But I haven't.  I have a performance this weekend and I confess, I'm terrified.   My biggest fear right now is that I'll have a moment where I truly do freeze up completely.  Where I go out before the audience and nothing happens...and I will be a horrible disappointment to everyone.

I know that this has to be temporary.  I have hope that eventually I will find a way past this. Naming it, not keeping it to myself (where it just tumbles around in my head telling me I'm a failure as a performer, teacher, artist, etc.) is a step in that process. For now I will  keep performing, try to be patient with myself, and keep reminding myself to practice self compassion.