Theatrical belly dance blends the emotion, drama and storytelling of the theater with the beautifully passionate and expressive art of belly dance. By connecting emotion with movement through a combination of dance drills and improvisational theater exercises the dancer discovers, and learns to express, her creative voice.

In each class students will explore movement to both recorded and live music with an emphasis on improvisation. Classes begin with a centering exercise and warm-up drills followed by a class focus. Topics covered include:

The classes are open to any dance student who has taken a minimum of at least one full session of belly dance classes.

Each individual brings their own history and personal story to the dance. In recognition of this we seek to create a safe space for students to explore, and step beyond, the current boundaries of their dance.

Registration:
Posted by Joie at 7:22 PM No comments:

Yesterday my performance troupe, Dark Follies, gathered to share a New Year's Eve brunch and to watch the film that was one of the inspirations for the troupe's name and show style, "Ziegfeld Follies."

Watching that film brought me back to when I was a child and first saw it. The last time I saw the film I was about nine years old; too limited in experience to understand some of the comedy or to pick up on some of the racial stereotypes presented in performances such as Fred Astaire's appearance a Chinese laborer in Limehouse Blues. What I do remember feeling nearly overwhelmed by the costumes, the sparkles, the music and oh the dancing!

When I watch films like "Ziegfeld Follies" or any such old style Hollywood musical/dance film I find a lot of inspiration.  What strikes me the most about them (aside form the glorious over the top splendor) is the artistry involved. Everything from the sets (which would today be done almost exclusively with CGI) to costuming to lyrics, everything is done with such intent. Nothing is unnecessarily a part of the performance and the performers, whether singer, swimmer, dancer, comedian or musician do what they with so much skill and know their parts so WELL that the life and voice of the character is able to fully sing.

While I think of my solo creative work and that of the troupe I realize I want to bring just that sort of artistry to my performance.  While neither I nor the troupe have the funds or time to put on events of Hollywood scale, I do believe we can create performances with that same artistry and intent. In fact I think back to another inspiration for the Follies, the street performers I saw in Boston as a child, and how they were able, with minimal props and costuming, to put on a short show that was as creative and engaging as any old school Hollywood or Broadway show.

Being on a small stage or having a small band or having basic costuming need not limit us - the only limitation is that of our own bodies and amount of effort we are willing to put into our creative practice.
Posted by Joie at 12:00 PM No comments: 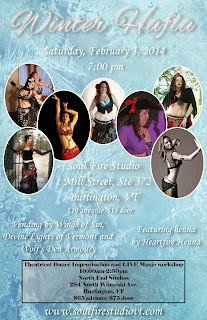 I am very excited to be co-teaching this workshop with drummer Stephen Carpenter on February 1st in Burlington, VT!  Come join the fun.

Theater has scripts. Dance has choreography. Music has arrangements. However each of these art forms also has a long history of improvisational performance. In this four hour intensive we combine the improvisational techniques of the theater, belly dance and middle eastern music to create expressive theatrical performance.Theatrical belly dancer Joie Grandbois and musician Stephen Carpenter bring together their performance experience on both sides of the drum to bring this unique workshop to you.While improvisation can be intimidating, they seek to create a safe space for dancers to explore creative expression and where mistakes are not only expected, but encouraged.

Rhythm 101 – We often tend to intellectualize music (Wait was that a doum? A tek? How many counts? 1,2,3...uh...9?). Learn the basics of Middle Eastern rhythm in a fashion that moves them out of your head and into your body.

Off the “Beat”en Path – we most often keep our accents on the beat but you can also dance around the beat, using the rhythm to accent the peak of a movement, moving within the silence between beats and exploring melody.

Mood Combinations – There are particular belly dance movements lend themselves to expressing certain emotions. Combining these movements allows you to create a moment of dynamic emotional expression on the fly.

Storytelling – you may not know the music you are about to dance to but that doesn't mean you can't have a plan (and what to do when you don't have one!)

Conversation – Performance to live music is a collaboration between musician and dancer yet sometimes it can seems like we speak different languages. How to communicate with the musicians you perform with before, during and after the show.

The workshop is open to dancers who have attended at least two fulls sessions of a belly dance class and have solid understanding of basic belly dance technique.

Dancer, choreographer, musician, writer…storyteller. Whether she is using the medium of dance, rhythm or words Joie seeks to bring to life the character present in a creative work. A lifelong dancer Joie entered the world of belly dance through the side door of raqs gothique after falling in love with its dramatic storytelling nature. Her dance explorations have also led to a study of cabaret and Turkish styles of the dance expanding her love of the art form. She is also a student of Middle Eastern percussion, specifically the riqq, and has a love of playing the zills. Blending the arts of music and theater with the improvisational nature of belly dance she brings drama, humor and an appreciation for the unexpected to the stage.

In teaching theatrical belly dance Joie seeks to share not only technique but to also create a safe space for dancers to explore and step beyond their creative boundaries. She hopes to initiate the conversation between artist and muse so that each dancer may connect with and express their own unique voice.

She is the founder and director of the street vaudeville performance troupe Dark Follies which formed in 2008 and performs as a solo artist around New England.. She teaches Theatrical and Exploratory Belly Dance in Portland, Maine at Bright Star World Dance. www.joiegrandbois.blogspot.com www.darkfollies.comjoiegrandbois@gmail.com

Stephen Carpenter, has been studying hand percussion for most of the current century with a particular focus on the rhythms of the middle east. Stephen has played with variety of performers in Maine and around New England in both stage and classroom settings. Through the voice of the drum and ney he seeks to create a conversation between the music, dancer and audience. He is a founding member of the band Spoonmaker's Diamond and for the past four years he has been the musical director for the Portland, Maine based street vaudeville troupe Dark Follies. Stephen is also a professional woodworker who crafts many of the instruments he plays upon.
Posted by Joie at 11:46 AM No comments: