Last night I dreamed of a cat that couldn't walk.

She was a fluffy silver tabby, much like my own Miss Pickles.  When I first saw her she was sitting up, as cats do, with her front paws side by side in front of her. She looked like a perfectly normal and healthy cat. Except when she tried to walk.

She would start to take a step and she would just tip over and fall to the ground.

I watched this over and over, not understanding why it was happening.

I moved closer and this time when she moved I saw that she would pick up her front left leg to take a step and the moment her little paw touched the ground again, the leg would become smoke and vanish. And she would fall to the side again.

She would sit up and the leg appeared to be back.

I reached out to touch the vanishing leg and it disappeared. Where the leg would have been was a well healed stump with a scar faintly visible beneath her fur. I realized that whatever caused this kitty to lose her leg happened a very long time ago.

She looked down and licked the stump a few times.

I woke up shortly after.

The dream reminded me of how so many of us are unaware of our own wounds, or how those wounds impact our ability to make our way in the world. We may think that because the injury itself is in the past, that its impacts are too. Or we may, like the cat in the dream, not even know we were wounded; we just know that we seem unable to navigate the world well.

Even when we are aware and we decide to do the work of healing, we too often begin the process with the idea that that it will lead to a restoration, as though the wound will be excised leaving no trace of it ever existing. But we can't go back to exactly who we were before our traumas, some of us live with traumas that happened when we were so young, we don't remember who we were before, or we have been carrying it for so long that healing involves learning a completely new way of being in the world.

I feel like this is where our country and culture are at right now. There are many, many people who are only now becoming aware of how wounded we are as a culture, and there are many of those people who want to do something about that but feel stuck because the only way they, we, know to go is on the path we've been blindly walking all along. There are other paths but they are not as clearly marked and that is frightening. But we also know we can't go back, because what is behind is what caused the wound in the first place; many of our personal wounds are the result of this same wounded culture that continues to perpetuate the harm.

Healing our cultural wounds will require us to heal ourselves.  2020 brought the awareness, I hope that 2021 brings us the way forward.

I share a lot about my personal struggles. Sometimes I'm just having a yucky day, other times I might be dealing with a PTSD trigger, or pulling myself out of a depressive episode. I write about good stuff too, but this post is not about those posts.

I started sharing things online in part because writing is one of my big tools for processing, but the main reason was because a large part of my trauma involves carrying secrets and pretending things are okay when they were not.  Writing about what I was feeling, putting it into some sort of tangible form, and then sharing it with someone else helped overcome that, but there was a side benefit I didn’t intend or expect.

Over the years I have had a variety of reactions from people. There are those who just click on the like, love, or cares emojis. Some share their stories of dealing with similar things. Others offer hugs, kitty pictures, or general words of support.

What no one has ever said in response to any my posts is, "Hey you weirdo. You must be the only person on the planet who has EVER felt this way."

You are not. Whatever you are experiencing someone in this vast world, offline or on Facebook, has felt it too.

I know that for me, just knowing that someone else has felt something similar helps me to confront those inner voices that try to convince me that I what I am feeling is somehow wrong or “not normal.” It reminds me that those voices are not telling the truth, and that my experience is not an isolated one, but a human one. 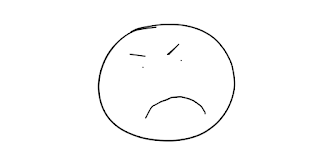 Grumpy leaves me feeling annoyed with everything.

The world. Humanity. You. Me. Everyone and everything.

Is that a sock on the floor?

WHY IS THERE A GODDAMN SOCK IN THE MIDDLE OF THE FUCKING FLOOR??

Grumpy arrives at the party carrying unannounced discontent; glad to be here but the dip could use more salt, the chair is lumpy, and are you struggling financially because it's a bit chilly in here.

I never remember if I invited them or not. Or why.

Grumpy eats a package of tiny white powered donuts, a double-decker oatmeal cream pie, and a bag of Fun-Yuns out of spite. Spite for who or what...doesn't really matter.

and Grumpy
doesn't
really
want
to
talk
about
it
anyway.

Grumpy will sit here with a broody furrowed brow, answering all questions with one syllable.

Grumpy walks around with stompy feet, full of sighs, wishing someone would just FREAKING ASK ME HOW I'M DOING BECAUSE NO ONE REALLY CARES...AND...

WHY OH WHY DOES NOBODY CARE???

Grumpy only stops to pet the cat.

Grumpy really only hears what Grumpy wants to hear.

Grumpy does not want to participate in today.

Grumpy will be staying in their room until Thursday...